Sienna Hills is the newest offering from Suntrust and it will be located in Brgy. Antipolo Del Sur in Lipa. This exclusive project earns the location advantage as it is built on what is dubbed as the “New Wave City”, also the Little Rome of the Philippines. Lipa City is located far enough from Metro Manila so you can enjoy your peace and solitude. And yet, it is still fairly accessible from Metro Manila via the STAR TOLL Way. If you need to go to Metro Manila, you won’t need to drive far because you can easily drive from here to there (and vice versa).

Lipa City is also evolving into a bustling city center of its own. In fact, it is one of the major cities in the province of Batangas. It is recognized as an institutional, educational, investment, religious, and commercial center of the province. It also has an extensive road network. Hence, it serves as a transportation hub that will get you from one point in Batangas to another with tremendous ease.

Speaking of Lipa City being an institutional and economic center, it is evidenced by the fact that there are several businesses that are headquartered in the city. Among these major institutions are DOLE, DAR, LTO, and DTI, to name a few. Meanwhile, the city of Lipa has earned the nickname “Villa” since it was once the largest coffee supplier in the world (during the 1800s).

Sienna Hills boasts off having several modern facilities and amenities that will enable you to have a relaxing stay in the community. It is the aim of the developers at Suntrust to provide future homeowners with enough relaxation amenities so you can enjoy the kind of lifestyle that is afforded within this community. But if you seek some variety, there are several nearby places of interest to nourish your soul and your desire for relaxation and recreation. In particular, there are several resorts and farms in the area to choose from. Your options include La Leona Resort, The Farm at San Benito, BlueRoze Farms, Kawilihan Resort, Onsemiro Hotel and Resort, to name a few.

For your practical needs, there are many major markets near Sienna Hills so you can buy supplies for the home. Your options include Puregold, South Supermarket, and Lipa City Public Market. If you prefer shopping for goods at the mall, you have quite a few options nearby such as SM Lipa, Robinsons Lipa, and Fiesta Mall.

If you enjoy golfing, there are many golf clubs for you to join in at Lipa City. Two of the most notable ones are Summit Point and Malarayat Golf and Country Club. Its status as an educational center of Batangas is reinforced by the rich array of good schools to choose from. You can send your children to any of the following schools in Lipa: New Era University, De La Salle Lipa, Batangas College of Arts & Sciences, Lipa Montessori School of Learning, and Lipa Adventist Academy.

For your health and medical concerns, you can find many good hospitals within Lipa City. Among your options are Fernando Air Base Hospital, Lipa Medix Medical Center, and Ospital ng Lipa. 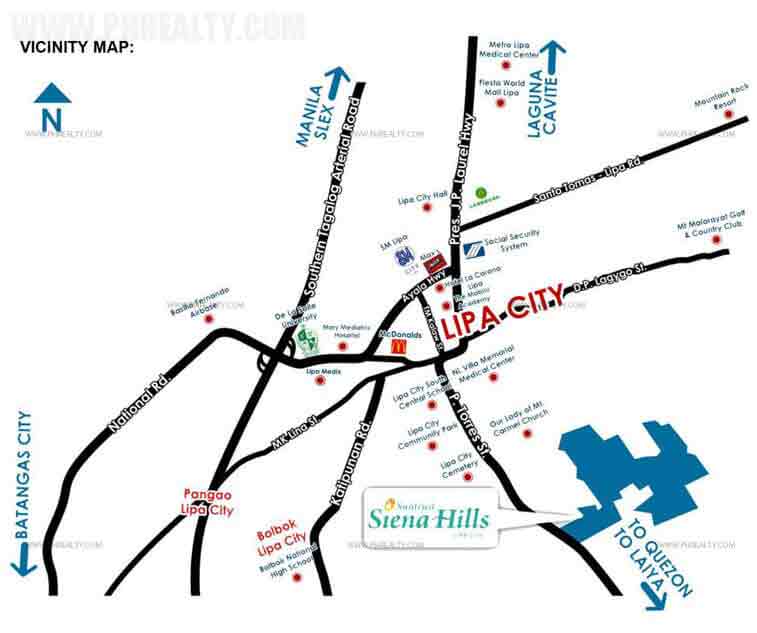